Ever hear of a cocktail called The Godfather? It’s made with scotch and amaretto, usually Disaronno because that’s the one most liquor stores stock when it comes to almond flavored liquers. If that still doesn’t ring a bell, watch the video above for Disaronno’s catchphrase so will never leave your brain. Also, conventional bartender wisdom says a proper cocktail has at least three ingredients so big SPOILER ALERT: Disaronno on the rocks is not technically a cocktail, it’s a mixed drink.

Right, now that we’ve cleared that up, the Anarchist substitutes rye for scotch for a drink that’s just as easy to make but with a bit more kick..like the ending of the actual Godfather movie.

Steps You Need to Take To Turn This Into a Drink

Fill up a mixing glass two-thirds of the way with ice cubes. Add rye and amaretto. Stir until the mixture is chilled. Strain into a rocks glass. Put on the Sex Pistols Anarchy in the UK and you now have yourself an exciting pre-game ahead of you.

A dash of Angostura Bitters

A dash of Regan’s Orange Bitters 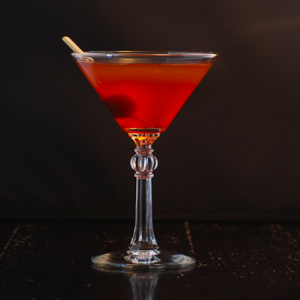 Kings of Manhattan, a drink that makes you feel like it sounds. Photo: NY Distilling Co.

Steps You Need to Take To Turn This Into a Drink

Add all ingredients to a mixing glass that’s been filled two thirds of the way with ice until the mixture is chilled. Strain into a chilled cocktail glass, which you can make by simply putting a cocktail glass in your freezer but not near the meat or fish you’ve been keeping in there for months. Garnish glass with a brandied cherry on a toothpick or break all the rules and just drop the brandied cherry right into the glass. Otherwise you might be walking around with a toothpick all night. Here’s a reenactment of what could happen courtesy of Larry David, who we also think would love Rye on Pastrami but would obviously have some constructive criticism.